What is the purpose of an F-clamp? An F-clamp is a simple mechanical device used in woodworking or metalworking to hold work pieces together before they are permanently attached with glue, adhesive, nails or screws. In this article, we'll provide a quick summary of F clamp use.

Introducing F Clamp Use: What Is It For?

There are many useful options when it comes to clamps for your project. Each type of clamp has a specific purpose and function that separates it from the others. In this article, we'll provide a quick summary of F clamp use.

What is the purpose of an F-clamp? An F-clamp is a simple mechanical device used in woodworking or metalworking to hold work pieces together before they are permanently attached with glue, adhesive, nails or screws.

The F-clamp consists of two horizontal rods connected together by a vertical rod with a large screw on the removable horizontal rod to tighten it.

The name of the clamp comes from its shape, which resembles the letter "F." The F clamp is also known as a quick clamp. the F clamp works similarly to the G clamp because one jaw is fixed to the end of a bar, while the other jaw is removable and can be easily slid into a different position.

However, the jaws of the G-clamp can be much wider than those of the F-clamp. the shape of the F-clamp is often used by amateurs and professionals to join workpieces because its jaws allow the parts of the project to be perfectly parallel together. the F-clamp is available in a variety of sizes, which makes it possible to perform different clamping activities. 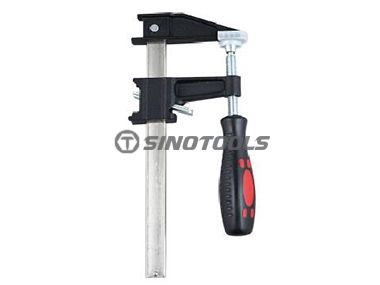 How Does an F Clamp Work?

The F-clamp consists of several parts that allow it to hold the workpiece securely, including:

1.The Bar: The bar of an F-clamp can also be referred to as the sliding arm. The bar is a long, straight piece of metal that is strong enough to withstand the pressure of clamping large and heavy workpieces. The bar of a vice is usually made of forged steel that has been tempered to increase the toughness of the metal. Even though tempering minimizes the hardness of the steel, it makes it less brittle. The top of the bar has a serrated edge, which helps to give extra grip to the moveable jaws when clamping. the bar of the F-clamp can also be galvanized to increase the rust resistance of the bar.

2.The Jaws: The jaws of an F-clamp are thin metal plates placed parallel to each other to grip the workpiece and hold it firmly in place. The jaws can also be referred to as holders. One of the jaws is fixed at the end of the bar, while the other jaw can be moved along the sliding arm, so it can be adjusted to the desired position. The jaws have cleats, which are the parts that come in contact with the workpiece. These cleats are usually covered by plastic pads so that the workpiece being clamped is not damaged.

4.The Handle: F-clamps usually have a large handle that provides the user with a comfortable grip when tightening or loosening screws. The handle is designed to be operated with only one hand, as the other hand is usually used to perform other functions on the workpiece.

5.The Spring Lock: Some F clamps contain a spring-loaded lock that allows the moveable jaws to slide quickly along the slide arm when the trigger is pressed. Once the trigger is released, the jaws are locked in the correct position.

6.The Tilting Jaw: Some models of F-clamps also have a tilting plate on the removable jaws. This gives the clamp the ability to clamp tapered or angled workpieces.

Often used in woodworking and even metalworking, F-clamps are used to hold wood or metal pieces while permanently joining them together. DIYers can easily handle it and perform simple tasks at home that require pieces to be joined together. Professionals can also easily use it for heavy-duty applications, as its size and strength allow it to accommodate the forces of larger and heavier workpieces.

If you have any interest or needs, feel free to contact us. Our friendly staff will always be happy to help you.

Tool boxes represent a great underappreciated necessity for your workshop or garage. As your abilities grow, you realize that a wider variety of tools can help you do your job more efficiently. The best advice we can offer is this: buy the highest quality toolbox you can afford.